The Serhiy Prytula Charitable Foundation, together with the TNT Agency and ARTLIVE, held a charity exhibition of photographs between 12-14 August, titled “Unseen Azovstal,” at ArtHall D12 in Kyiv.

The photographs were taken by Dmytro Kozatskyi (call sign ‘Orest’) – head of the press service of the “Azov” regiment. They depict life in the bomb shelters of the Azovstal steel plant while the regiment was enduring hell surrounded by the Russian occupiers.

The exhibition served to raise military aid for the fighters of the Azov regiment, who continue to endure torment while many of their comrades, including Kozatskyi, remain in Russian captivity. It also reminds the world about the defenders of Mariupol and their heroism.

The photographs were exhibited with the permission of Kozatskyi’s mother, Iryna Yurchenko, who agreed to give an exclusive interview to the Kyiv Post’s Iryna Pavlenko.

[Kyiv Post] Tell me please Iryna, how was the exhibition organized? Were you involved in the process?

[Iryna Yurchenko] I was invited to an exhibition in Lviv displaying photographs taken by my son and some other photographers. There, I met a couple of guys from Kharkiv and Kramatorsk who decided to arrange the exhibition in Kyiv. They contacted the Serhiy Prytula Charity Foundation and co-organized the event to raise funds to provide on-going support and assistance to the “Azov” regiment.

[Kyiv Post] Are the photographs on display at the exhibition only those taken by your son?

[Iryna Yurchenko] Dmytro took a lot of photos of injured defenders, then processed them using online tools before sharing them via social media to show the world what was happening at the Azovstal plant. He wanted to share those pictures everywhere, so people would realize what was happening and not be able to forget.

[Kyiv Post] Did he publish all the photos before evacuating from the plant?

[Iryna Yurchenko] On his last day there, he posted a message on social media that he had taken photos from the plant, the “place of his life and death,” and that he wanted them to be shared with the widest possible audience. [Kyiv Post] Do you have a favorite image, or one that is especially poignant?

[Iryna Yurchenko] Several come to mind. One is a selfie of him smiling with a blossom tree in the background – taken when they evacuated civilians, including children, from the plant. He said: “Mum, look at this photo I’ve taken!” This photo reminds me of Cyprus. It hangs on my wall at home and I talk to it sometimes when I feel sad. Another special image is a photo taken from inside the plant where Dmytro is standing in a ray of sunlight. You wouldn’t immediately know it was him.

[Kyiv Post] When I saw this photo online, it really impressed me. Perhaps it resembles a ray of hope?

[Iryna Yurchenko] Yes, this is my Dmytro! When I saw it for the first time, I understood that, despite some hard moments and times of despair, we really would win and Dmytro and his comrades will come back home alive. So, this is the ray of our victory!

[Kyiv Post] How did you feel when Russian television channels published the video about Dmytro being a traitor?

[Iryna Yurchenko] My daughter called me and said: “Mum, mum, they published a video with Dima!” I told her: “Don’t believe them! Don’t take it at face value!” I saw what condition my son was in when the video was filmed. I knew that he was not a traitor and never would be, no matter how hard things might become. They were forced to make a confession to suit the Russians’ fantasies. My son and his comrades did what they had to do. But he has never betrayed his sworn brothers. The most important thing to me from that video was that he was alive.

[Kyiv Post] Your daughter, Dmytro’s sister, described funny moments and Dmytro’s jokes, including that he succeeded in keeping a sense of humor despite such awful conditions. Have you managed to stay composed?

[Iryna Yurchenko] Honestly, it has been very hard to stay composed in such difficult circumstances, but my wings are strong. I have my daughter, my family, my job, and the power of prayer to help me get through. I’m not especially pious, but I always pray, as have my children ever since they were little. I feel as though prayer has protected us.

I work as a conductor of trains evacuating civilians. While my son was at the Azovstal plant and my daughter was in a bunker in Kyiv in hard conditions, I was helping to evacuate adults and children from Kyiv, Bucha, Hostomel, Irpin, and then Chernihiv. That gave me hope and faith.

Sometimes when I walk in the street, someone will come up to me and say: “Can I hug you?” This is inspiring and reminds me that we do not stand alone as individuals in the fight against this evil. We stand together and the world is fighting against the Russian invasion. 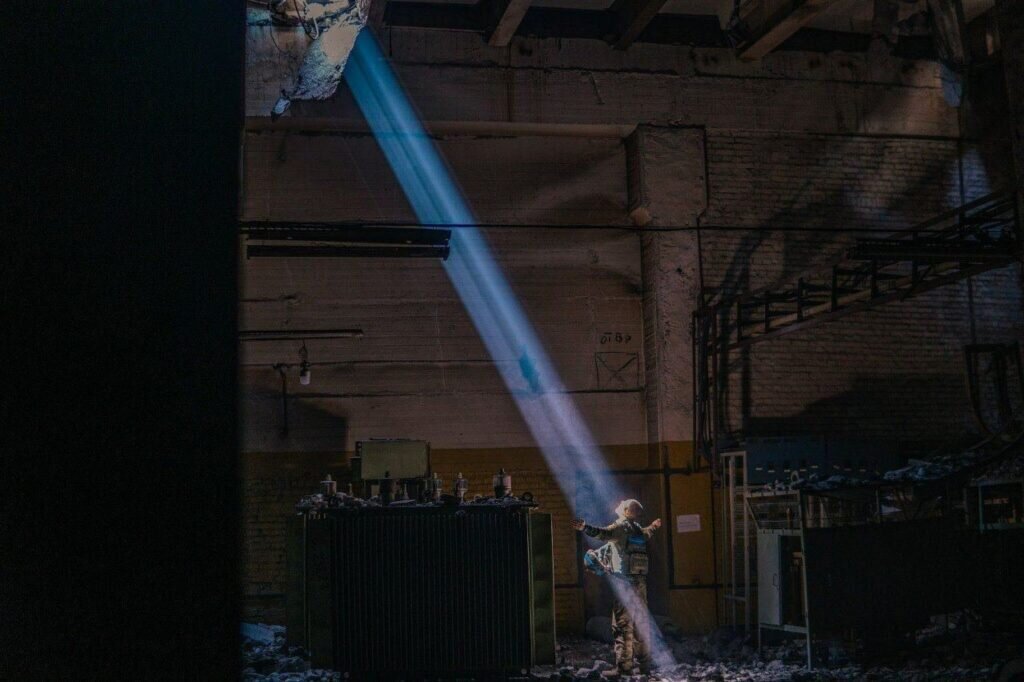 Dmytro Kozatskyi stands beneath a ray of light. Image from Kozatskyi.

[Kyiv Post] When Dmytro comes back home from captivity – and we all believe in this – what do you think he will he do next? Has he told you about any plans or dreams?

[Iryna Yurchenko] You know, I understand now that nothing and nobody can break him. I saw images from the last days before Dmytro left the Azovstal plant. They survived hell in there and didn’t know what was going to happen. I know that when he comes back, thousands of people will meet him wearing his images on T-shirts. His sister plans to produce those when they are liberated. As his mother, I just want to hug him, then I expect we will stay silent for a long time – just close to one another, crying with happiness. After some time, he will then start building his future plans. He has always made plans.

[Kyiv Post] Before the war, what did Dmytro do? You said that he’s a creative person?

[Iryna Yurchenko] Yes, he’s always been creative. Around the time of the Revolution of Dignity in 2013, he wanted to be a photographer and a war journalist. He takes great photos. He also wanted to become a singer and I’ve heard a few of his masterpieces. As his mother, I’ve always told him that it’s important to think about the future. He has a great knowledge of informatics and I suggested that he pursue an education in this field. But informatics isn’t really for him. Photography on the other hand, is a skill he was born with.

This website uses cookies to improve your experience while you navigate through the website. Out of these, the cookies that are categorized as necessary are stored on your browser as they are essential for the working of basic functionalities of the website. We also use third-party cookies that help us analyze and understand how you use this website. These cookies will be stored in your browser only with your consent. You also have the option to opt-out of these cookies. But opting out of some of these cookies may affect your browsing experience.
Necessary Always Enabled
Necessary cookies are absolutely essential for the website to function properly. These cookies ensure basic functionalities and security features of the website, anonymously.
Functional
Functional cookies help to perform certain functionalities like sharing the content of the website on social media platforms, collect feedbacks, and other third-party features.
Performance
Performance cookies are used to understand and analyze the key performance indexes of the website which helps in delivering a better user experience for the visitors.
Analytics
Analytical cookies are used to understand how visitors interact with the website. These cookies help provide information on metrics the number of visitors, bounce rate, traffic source, etc.
Advertisement
Advertisement cookies are used to provide visitors with relevant ads and marketing campaigns. These cookies track visitors across websites and collect information to provide customized ads.
Others
Other uncategorized cookies are those that are being analyzed and have not been classified into a category as yet.
SAVE & ACCEPT
Loading Comments...